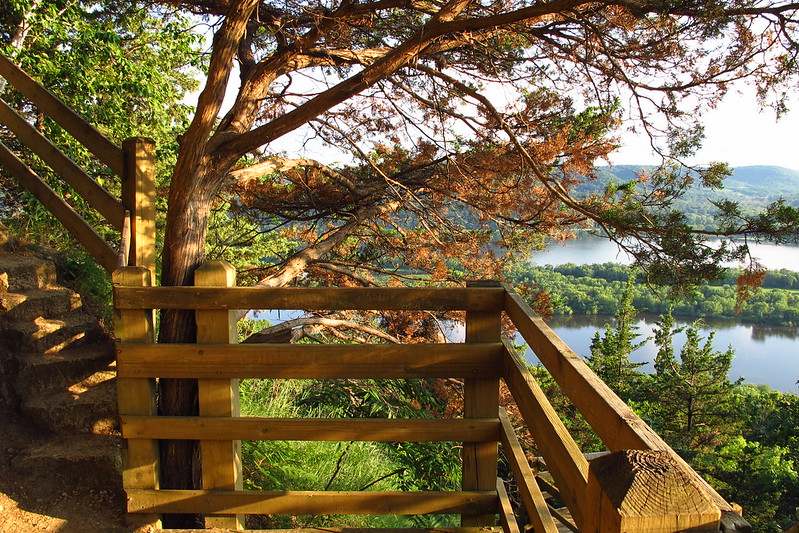 The pictures in this post are from Perrot State Park in Wisconsin on the mighty Mississippi River. 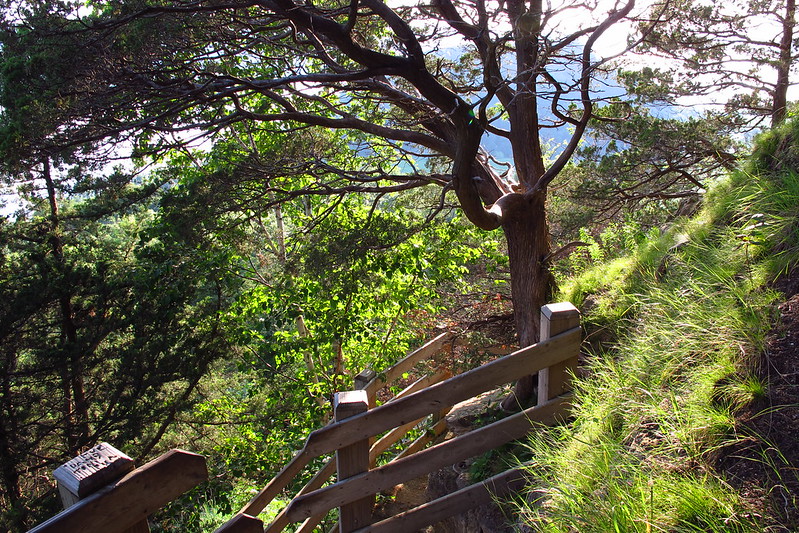 The two pictures above were taken on the way up to the top of Brady’s Bluff. 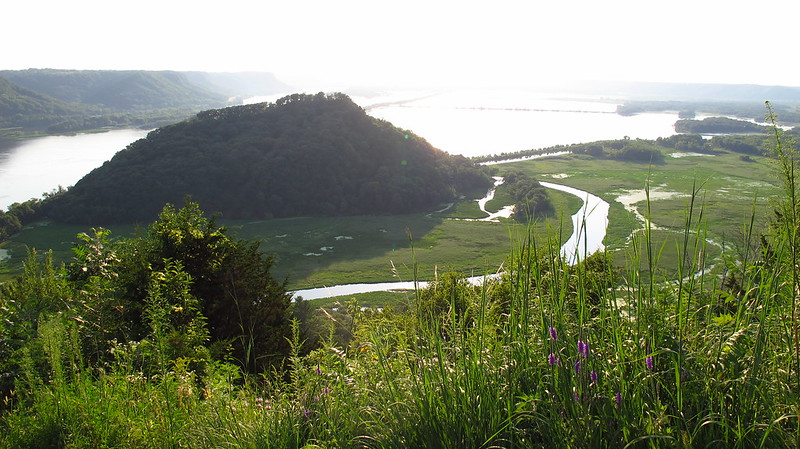 Trempealeau Mountain stands up in the midst of the waters. 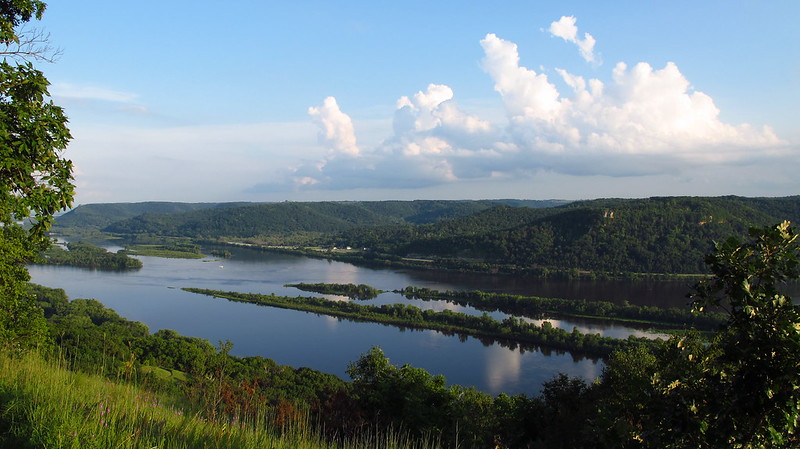 Brady’s Bluff stands 520 feet above the Mississippi, and provides a commanding view of the river and Minnesota. 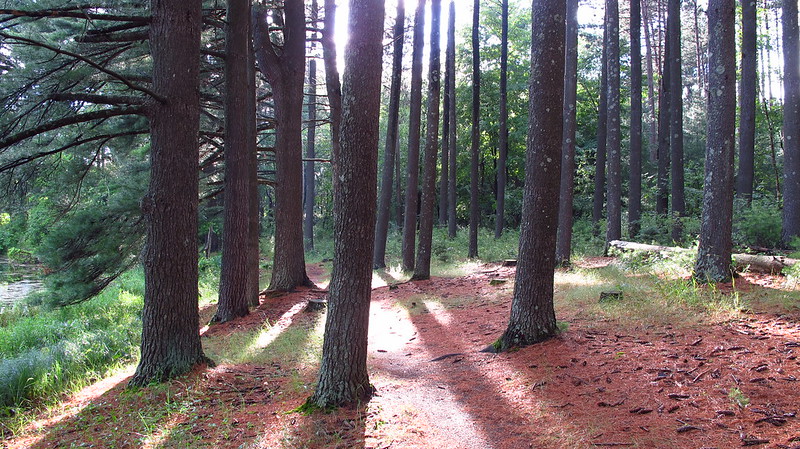 These pictures are from a hike in Hartman Creek State Park near Waupaca, WI. 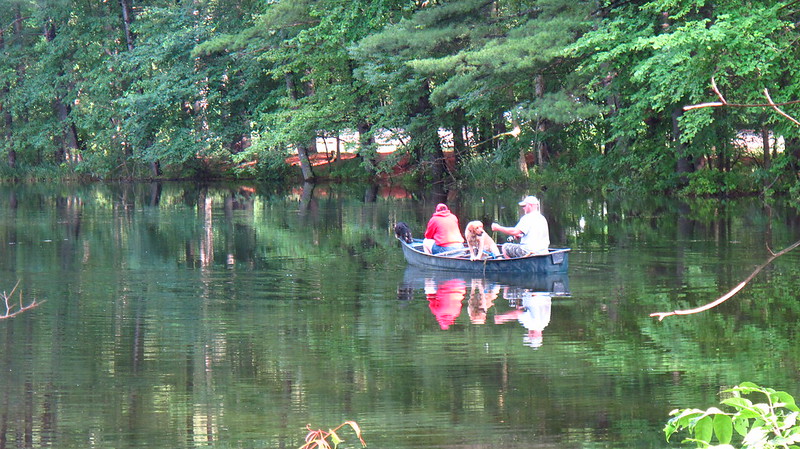 Fishing is popular in this area.  Two canines helped in this photo.

Is the word “canine” related to “Canaanite”?  A Canaanite woman came to Jesus, and cried, “Lord, help me.”  And Jesus answered,

“It is not right to take the children’s bread and throw it to the dogs.”  She said, “Yes, Lord, yet even the dogs eat the crumbs that fall from their masters’ table.”  Then Jesus answered her, “O woman, great is your faith!  Be it done for you as you desire.”  And her daughter was healed instantly.

Just wondering about the etymology and God’s grace. 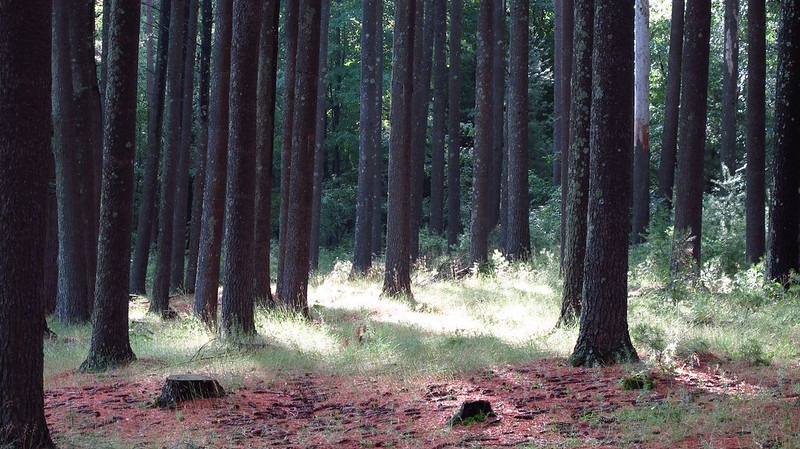 The sun came out after after a rain shower.  Back-light illumination is one of my favorite ways to photograph vegetation. 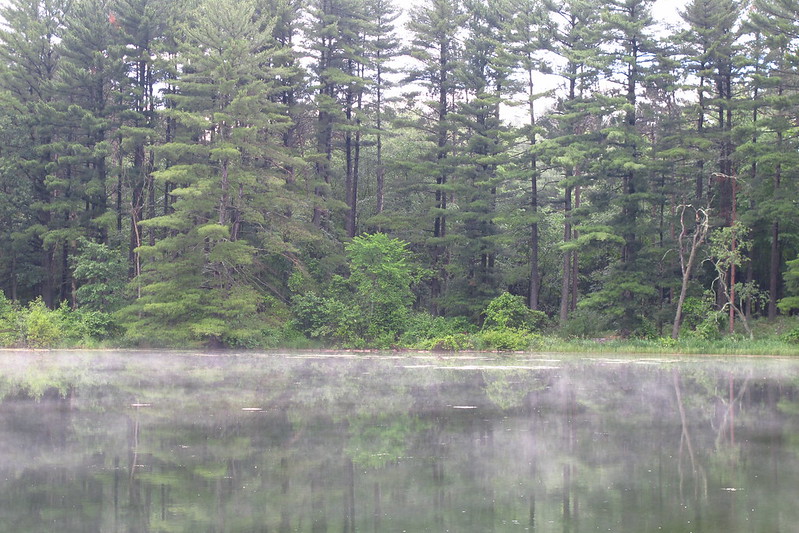 Rain fell as mist floated across the water.

Hartman Creek is one of my favorite places to go mountain biking.  It has an extensive single-track and double-track trail system.  However, I generally do not take pictures while mountain biking, opting instead to enjoy the sights and scents without electronics.

God’s blessings to you. 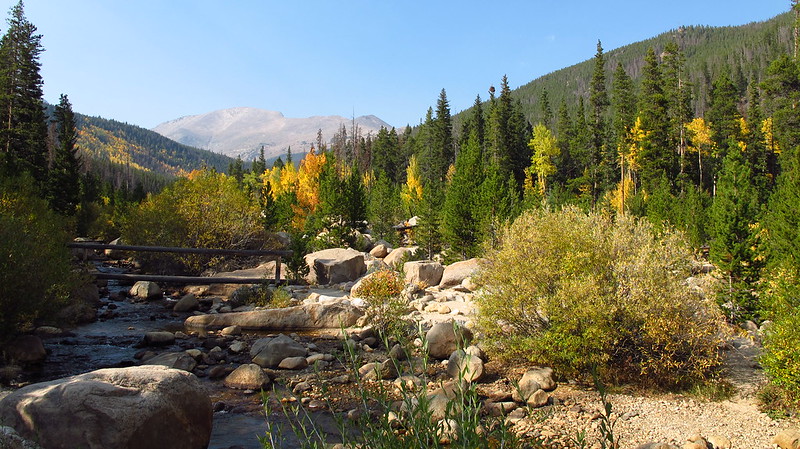 “From your lofty abode you water the mountains; the earth is satisfied with the fruit of your work…”

“The trees of the Lord are watered abundantly,
the cedars of Lebanon that he planted…” 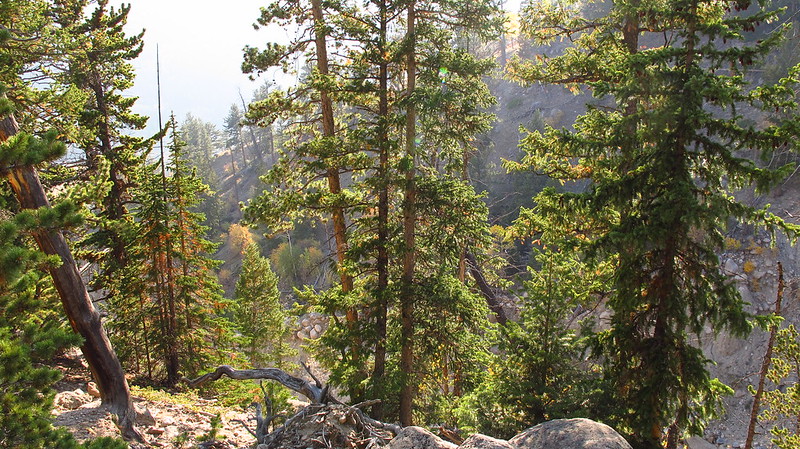 “The high mountains are for the wild goats;
the rocks are a refuge for the rock badgers…” 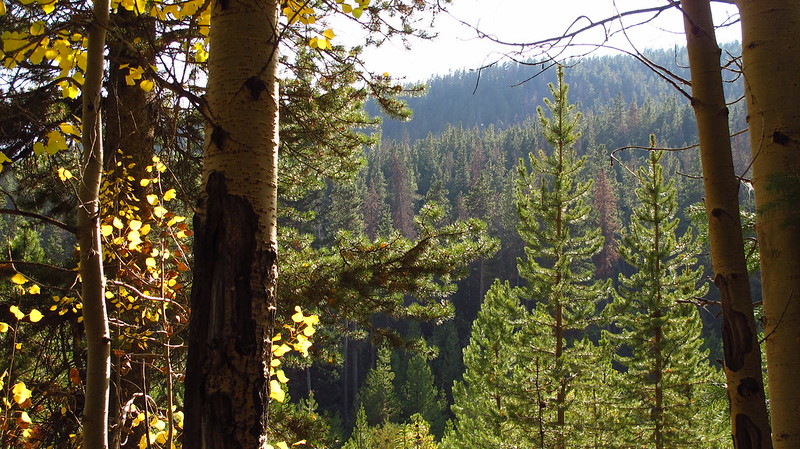 “O Lord, how manifold are your works!  In wisdom have you made them all…” 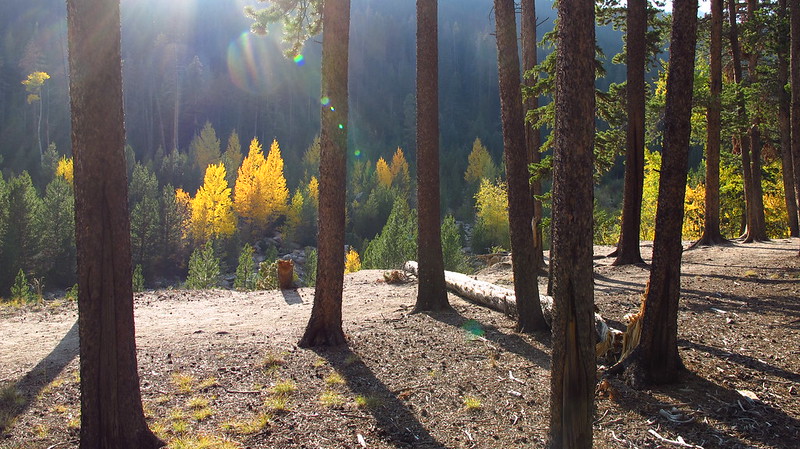 “Bless the Lord, O my soul!
Praise the Lord!”

The pictures in this post were taken on the Ypsilon Lawn Lake Trail in the Rocky Mountains, at an elevation of about 9,200 feet. 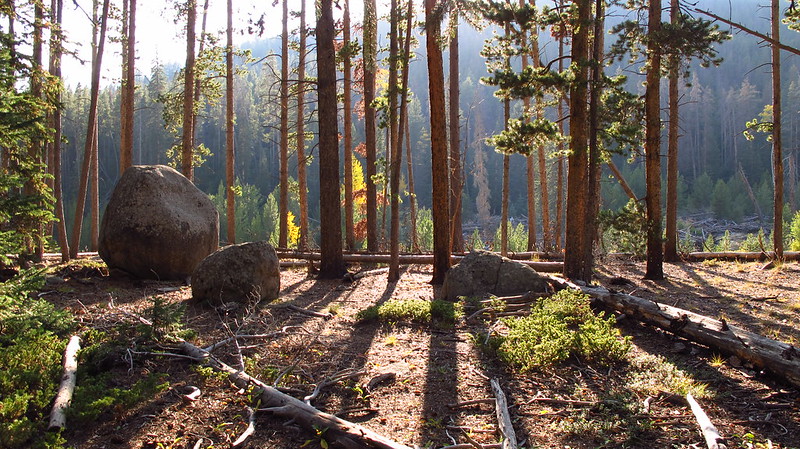 If the weather is right, get outdoors, and go hiking.  Enjoy what God has made.

God made the outdoors, it’s the best artwork around, and we can live right in it.

And don’t leave your friends (or family) behind. 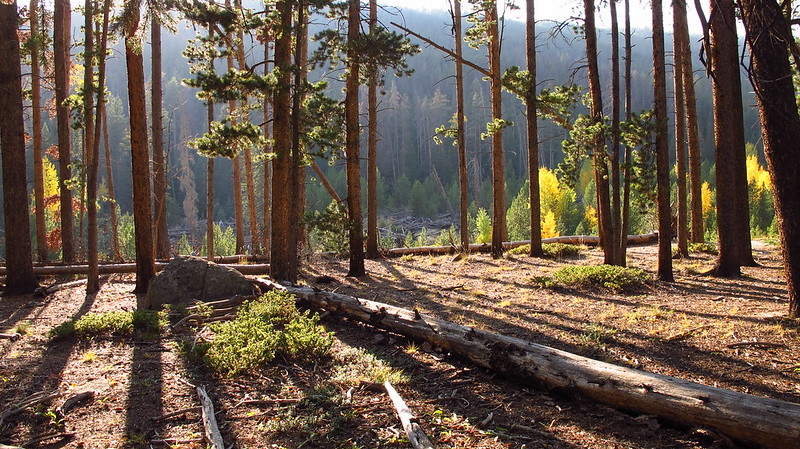 These pictures are from the Ypsilon Lawn Lake Trail in the Rocky Mountains in Colorado.

God’s blessings to you. 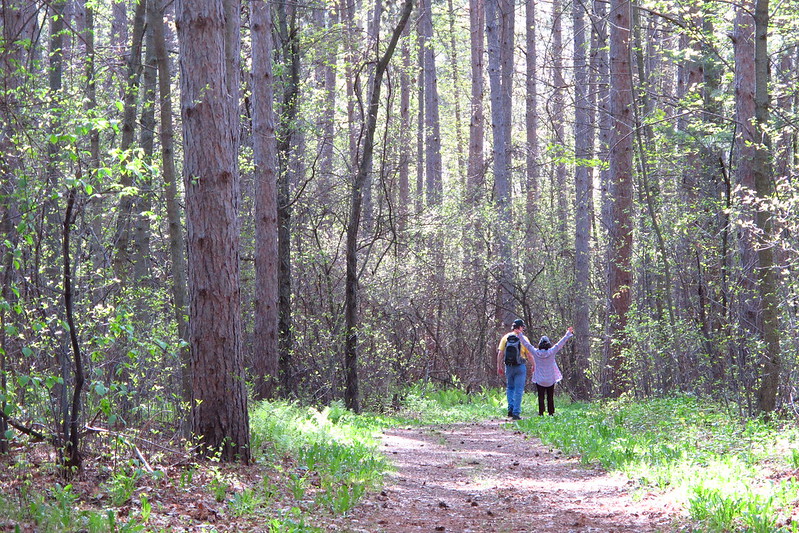 The Last Day, when the Lord Jesus returns, will be like Spring because it will be brimming with new and awakened life.  On that day, for those who revere his name, “the sun of righteousness shall rise with healing in its wings.”  (Malachi 4:2, ESV).

May the Lord bless you this Spring and always. 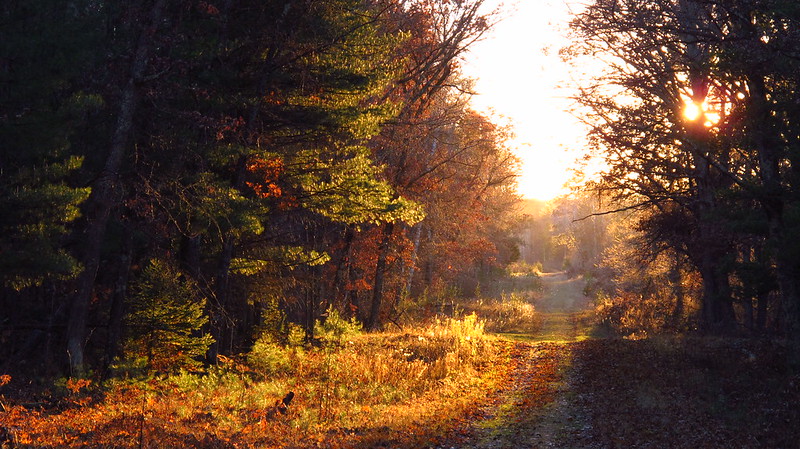 These are pictures from the last hike of Autumn.

The warm golden colors of the sunset were a fitting end to the Autumn hiking season.

“For everything there is a season, and a time for every matter under heaven.”  (Ecclesiastes 3:1, ESV). 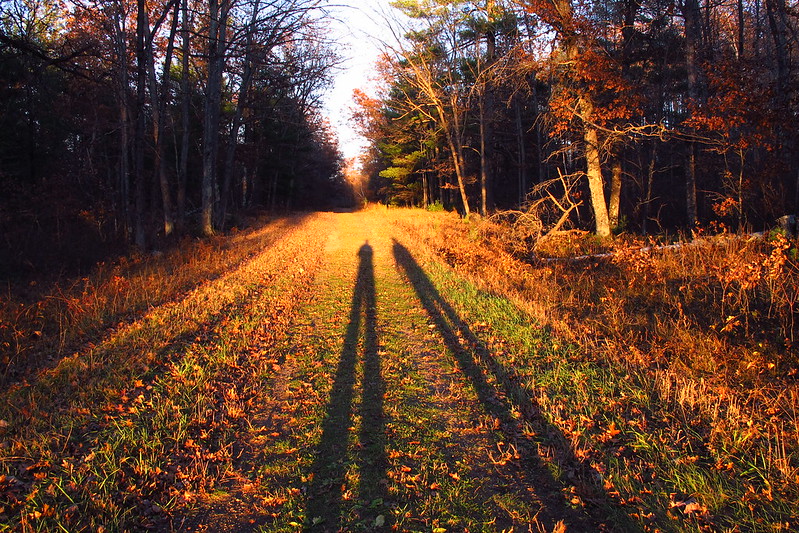 The pictures were taken at Governor Thompson State Park near the Peshtigo River in Wisconsin. 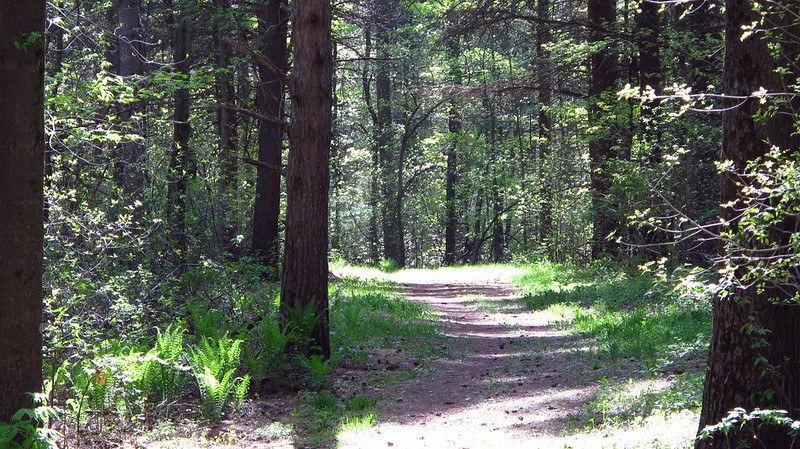 These pictures are from a Spring hike in the northern Kettle Moraine Forest near Greenbush, WI. 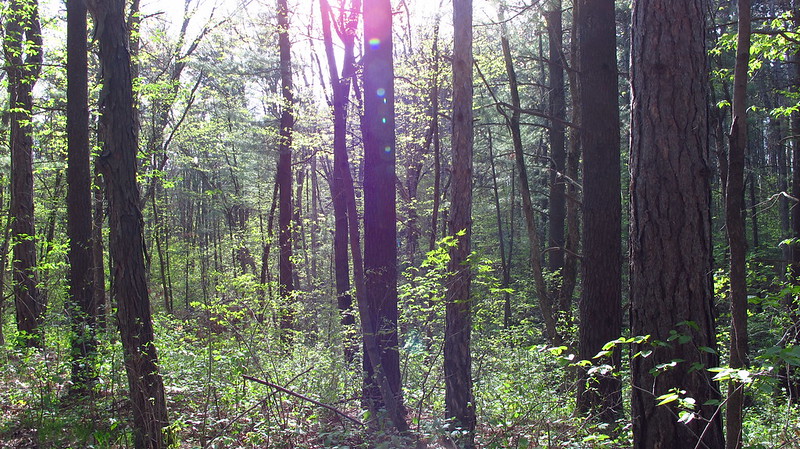 Exercise is good for the mind and body.

Truth and beauty are good for the soul.

Hiking in the outdoors combines beauty and exercise. 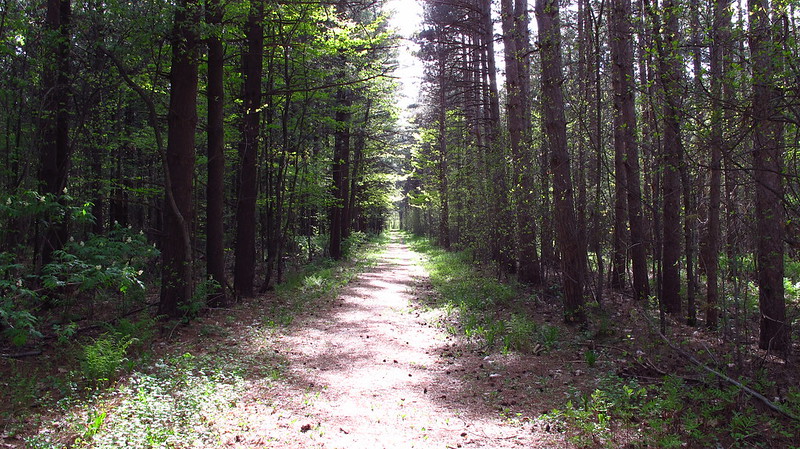 This particular trail used to be open to mountain biking, but now is limited to only hiking and cross country skiing. 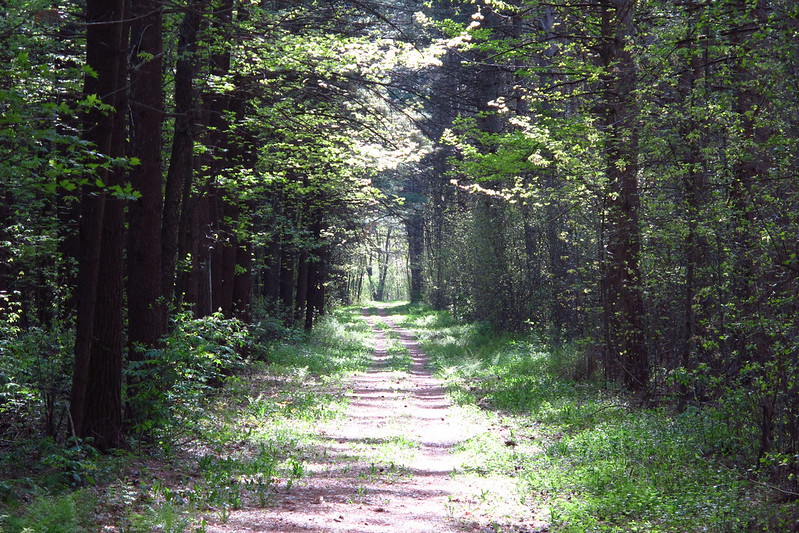 It was a good hike and a beautiful day.

The photographs in this post were taken on the Fern Lake Trail in Rocky Mountain National Park, Colorado; September 24, 2012 A.D.

The pictures are displayed in the order they were taken.

One can’t hike the Fern Lake Trail without taking a picture of a fern.

When hiking, it is good to see the small picture as well as the large.  By God’s decree, there is beauty everywhere!

The picture above is one of my favorite pictures from the hike.

The trail passes through these rocks.

The yellow orange spots on the pine tree trunk on the right are a clear sign of a pine beetle infestation.  The pine beetles are destroying pine forests throughout much of the western United States.

Actually, it’s called the Big Thompson River, and probably has a lot more water in the Springtime.

Above, a highlight of the trail is a waterfall and whirling waters known as “The Pool.”

The trail ascends up onto the side of the mountains.

The path climbs up through the sun dappled forest.

Fern Falls was the round trip point of the journey.  There wasn’t enough time to get to Fern Lake.  Hikers on the way back reported that there were two moose up at Fern Lake.  Maybe we will see them next year.

The majestic pine forest was the highest part of this hike.  Out of concern for rain and darkness and safety, it was time to hoof it back to the trail head.

Back on relatively flat ground, the sun came out, and allowed some time for a few pictures.

Below, the camera looks back to say good bye to Autumn color on the Fern Lake Trail.

The thunder clouds below were cracking with thunder and flashing with lightning.  Soon after leaving the trail head, a torrential downpour began high up in the mountains.

At lower elevations, there was a light rain.

A few weeks after these pictures were taken, this area around the Fern Lake Trail and The Pool was burned in a forest fire.  The fire burned about 700 acres.  As of this writing, the fire is contained, but still smouldering with some open flame.  (National Park Service October 2012 news releases).

We should be good stewards of all that God has made, and we should enjoy what He has given us while we have it.

Take nothing for granted.

A Picture of Me Pushing a Rock