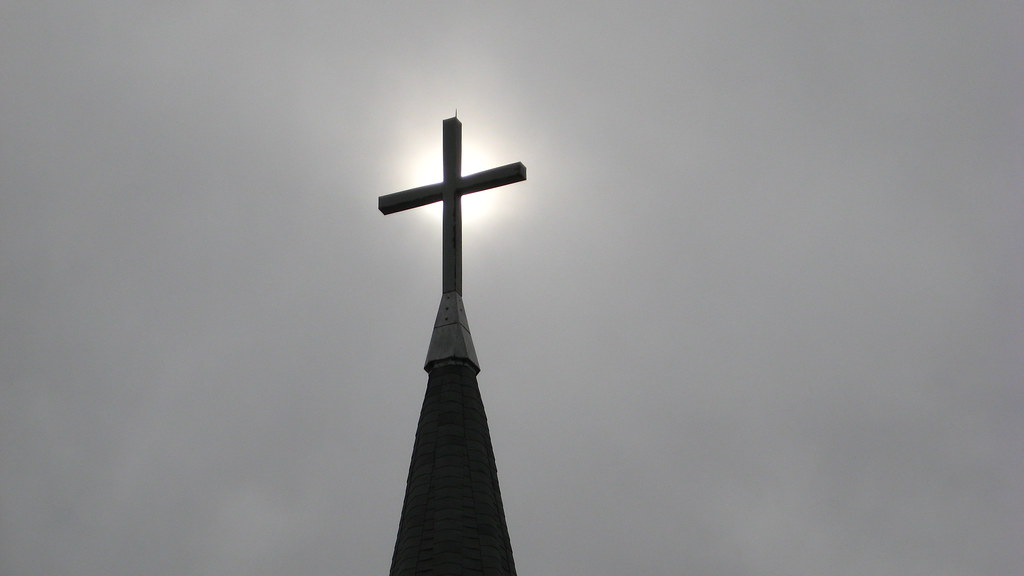 Whence come these sorrows, whence this mortal anguish?
It is my sins for which Thou, Lord, must languish;
Yea, all the wrath, the woe, Thou dost inherit,
This I do merit.

O wondrous love, whose depth no heart hath sounded,
That brought Thee here, by foes and thieves surrounded!
All worldly pleasures, heedless, I was trying
While Thou wert dying.

O mighty King, no time can dim Thy glory!
How shall I spread abroad Thy wondrous story?
How shall I find some worthy gifts to proffer?
What dare I offer?

But worthless is my sacrifice, I own it;
Yet, Lord, for love’s sake Thou wilt not disown it;
Thou wilt accept my gift in Thy great meekness
Nor shame my weakness.

And when, dear Lord, before Thy throne in heaven
To me the crown of joy at last is given,
Where sweetest hymns Thy saints forever raise Thee,
I, too, shall praise Thee. 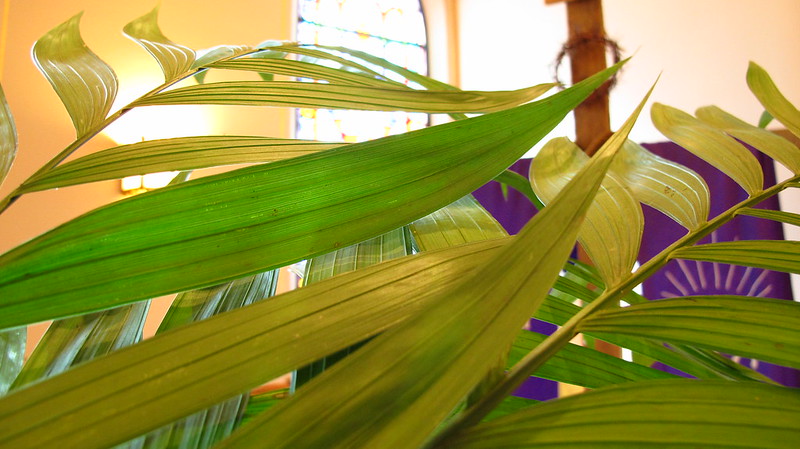 They spread their cloaks and palm branches on the road, and shouted, “Hosanna to the Son of David!  Blessed is he who comes in the name of the Lord!  Hosanna in the highest!”

Jesus, the King of All, entered Jerusalem.  He fulfilled the word of the prophet that said, “Behold, your king is coming to you; righteous and having salvation is he, humble and mounted on a donkey,” (Zechariah 9:9, ESV).

Hosanna, loud hosanna,
The little children sang;
Through pillared court and temple
The lovely anthem rang.
To Jesus, who had blessed them,
Close folded to his breast,
the children sang their praises,
The simplest and the best.

Blessed is He who comes in the name of the Lord!

Please pray for the Christians murdered in Egypt today. 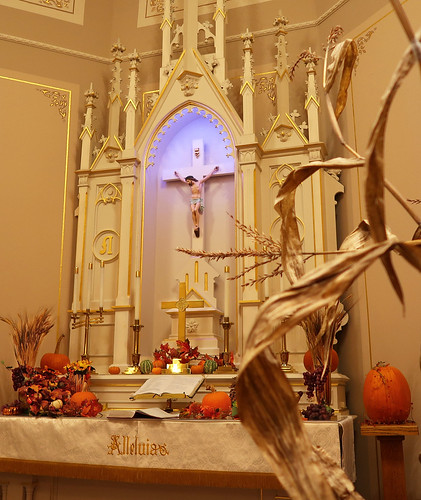 Every one who lives has something for which to be thankful.  Gratitude is the joy of life.

For God so loved the world, that he gave his only Son, that whoever believes in him should not perish but have eternal life.  For God did not send his Son into the world to condemn the world, but in order that the world might be saved through him. 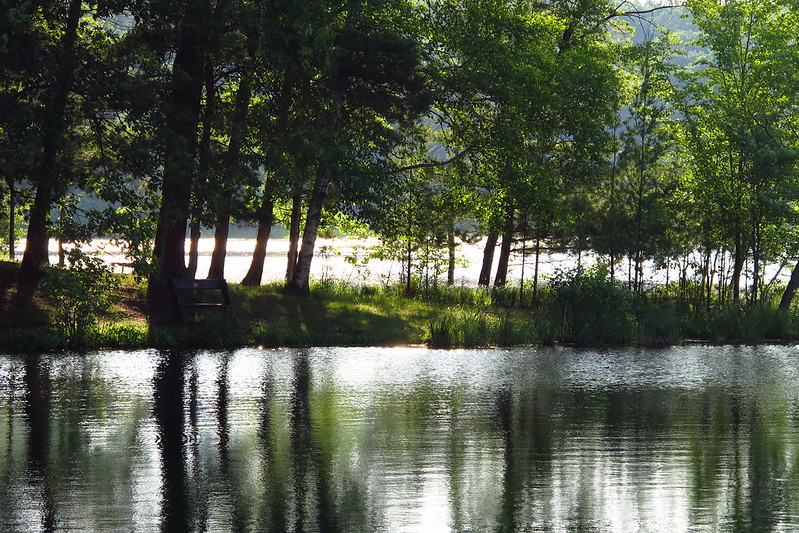 “‘If you then, who are evil, know how to give good gifts to your children, how much more will your Father who is in heaven give good things to those who ask Him!’  (Matthew 7:7-11)… 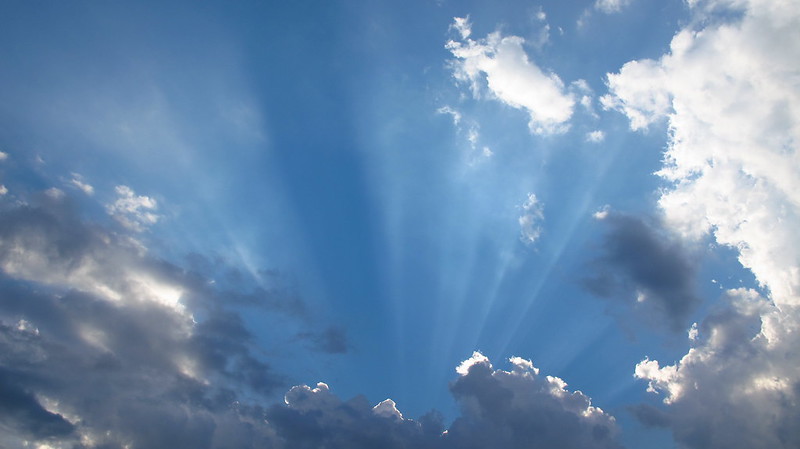 “… you will receive power when the Holy Spirit has come on you, and you will be My witnesses in Jerusalem, in all Judea and Samaria, and to the ends of the earth.”

After He had said this, He was taken up as they were watching, and a cloud took Him out of their sight.  While He was going, they were gazing into heaven, and suddenly two men in white clothes stood by them.  They said, “Men of Galilee, why do you stand looking up into heaven?  This Jesus, who has been taken from you into heaven, will come in the same way that you have seen Him going into heaven.”

Then they returned to Jerusalem from the mount called the Mount of Olives, which is near Jerusalem—a Sabbath day’s journey away.

The Festival of the Ascension is important because it emphasizes the physicality of our salvation.  Christ did not evaporate after his Easter resurrection, instead he appeared to hundreds of people over the course of 40 days.  He touched them, he ate with them, he spoke with them.  He left hundreds of witnesses.  He lived in time and space.  He stood on a real mountain, and rose from a real place.  He was one of us, and still is one of us.

Though he ascended into heaven, a higher dimension, so that he could fill the entire universe, he is still a human being.  (Ephesians 4:10).

Coming exactly 40 days after Easter, Ascension Day liturgically reminds us that Christ tarried here, and gave us many witnesses, and that his calling was not just to pay for sin, but also to bring us to be with him.  That is why he waited and stayed, to give us faith through the word of truth preached by his apostles.  It was his resurrection and the proof of his resurrection that he gave, that made the apostles bold.  They touched him, they saw him ascend.

The One who descended is also the One who ascended far above all the heavens, that He might fill all things.  And He personally gave some to be apostles, some prophets, some evangelists, some pastors and teachers, for the training of the saints in the work of ministry, to build up the body of Christ, until we all reach unity in the faith and in the knowledge of God’s Son, growing into a mature man with a stature measured by Christ’s fullness.  Then we will no longer be little children, tossed by the waves and blown around by every wind of teaching, by human cunning with cleverness in the techniques of deceit.  But speaking the truth in love, let us grow in every way into Him who is the head—Christ.  From Him the whole body, fitted and knit together by every supporting ligament, promotes the growth of the body for building up itself in love by the proper working of each individual part. 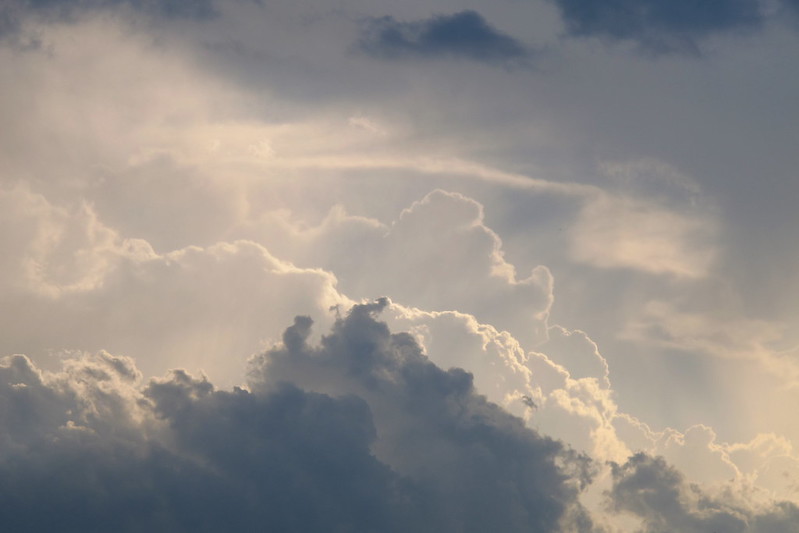 Heaven is our home.  Happy Ascension! 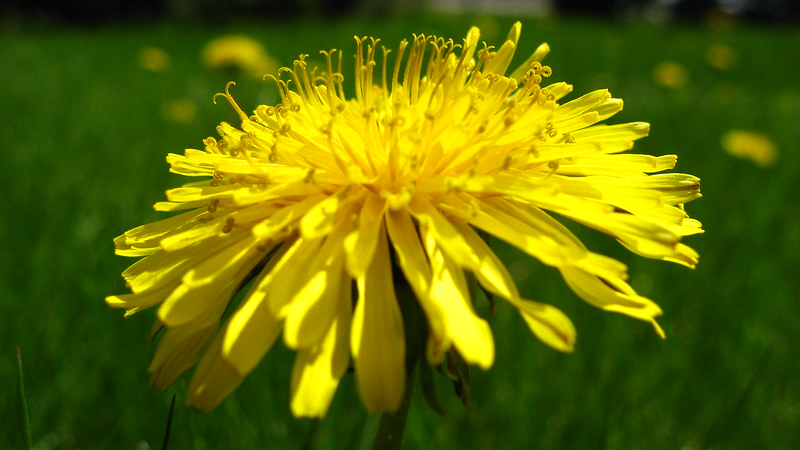 Let not your hearts be troubled.  Believe in God; believe also in me.  In my Father’s house are many rooms.  If it were not so, would I have told you that I go to prepare a place for you?  And if I go and prepare a place for you, I will come again and will take you to myself, that where I am you may be also.  And you know the way to where I am going…  I am the way, and the truth, and the life.

By his death and resurrection, Christ proved that he is Lord of all.  He kept his promise, and will keep every promise.  He works to prepare a place for us where all that is wrong will be made right.  And he will come again.

Be at peace.  The Lord is risen! 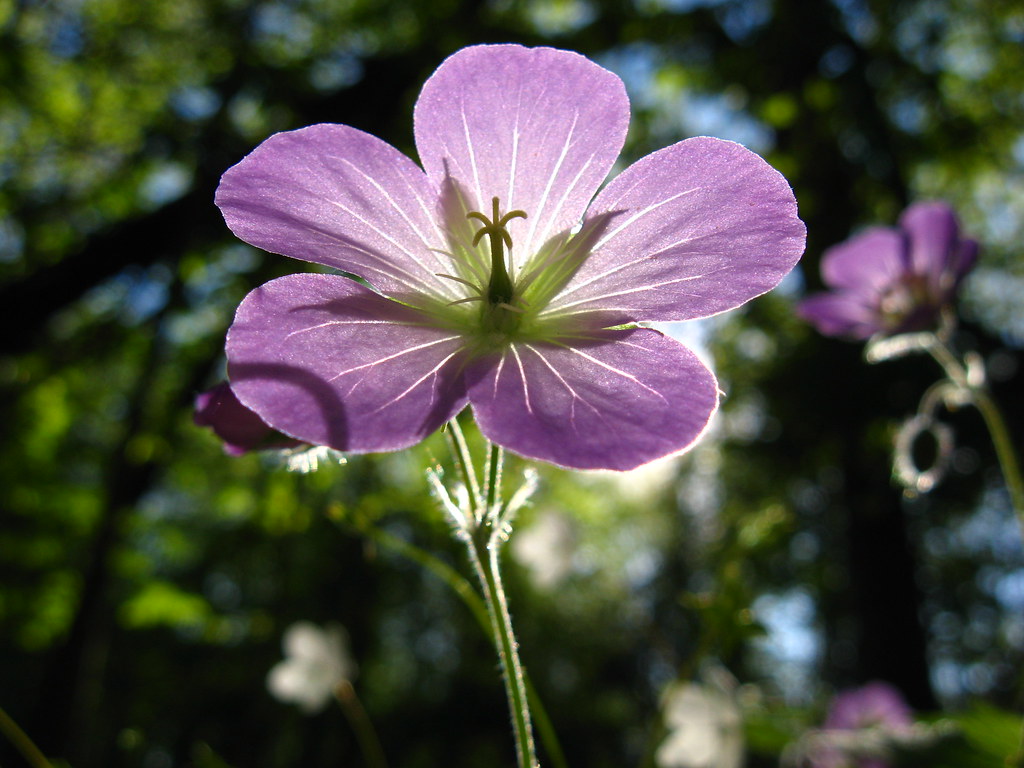 “Speak, Mary, declaring
What you saw when wayfaring.”

“The tomb of Christ, who is living,
the glory of Jesus’ resurrection;
Bright angels attesting,
The shroud and napkin resting.
My Lord, my hope, is arisen;
To Galilee He goes before you.”

He is risen, indeed! 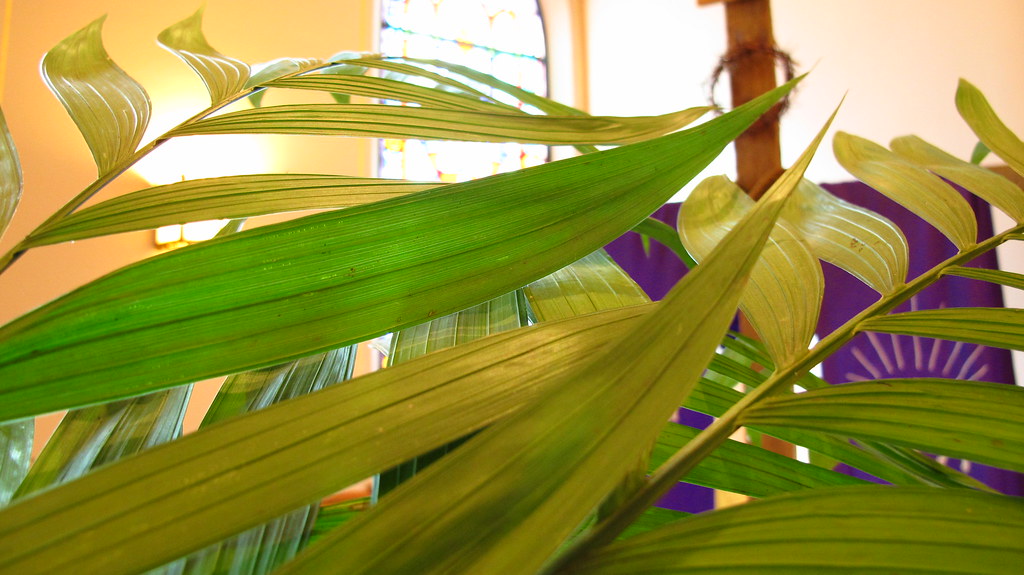 As he was drawing near—already on the way down the Mount of Olives—the whole multitude of his disciples began to rejoice and praise God with a loud voice for all the mighty works that they had seen, saying, “Blessed is the King who comes in the name of the Lord!  Peace in heaven and glory in the highest!”  And some of the Pharisees in the crowd said to him, “Teacher, rebuke your disciples.”  He answered, “I tell you, if these were silent, the very stones would cry out.”

Blessed is the King who comes in the name of the Lord! 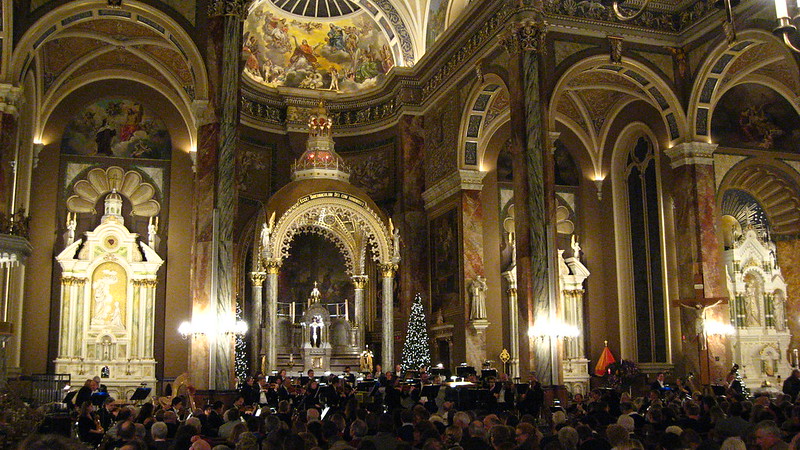 Today is the first day of Christmas, the annual feast celebrating the birth of Jesus Christ.  Jesus Christ is:

“God of God,
Light of Light,
very God of very God,
begotten, not made …
by whom all things were made;
who for us men and for our salvation came down from heaven
and was incarnate by the Holy Spirit of the virgin Mary
and was made man …” 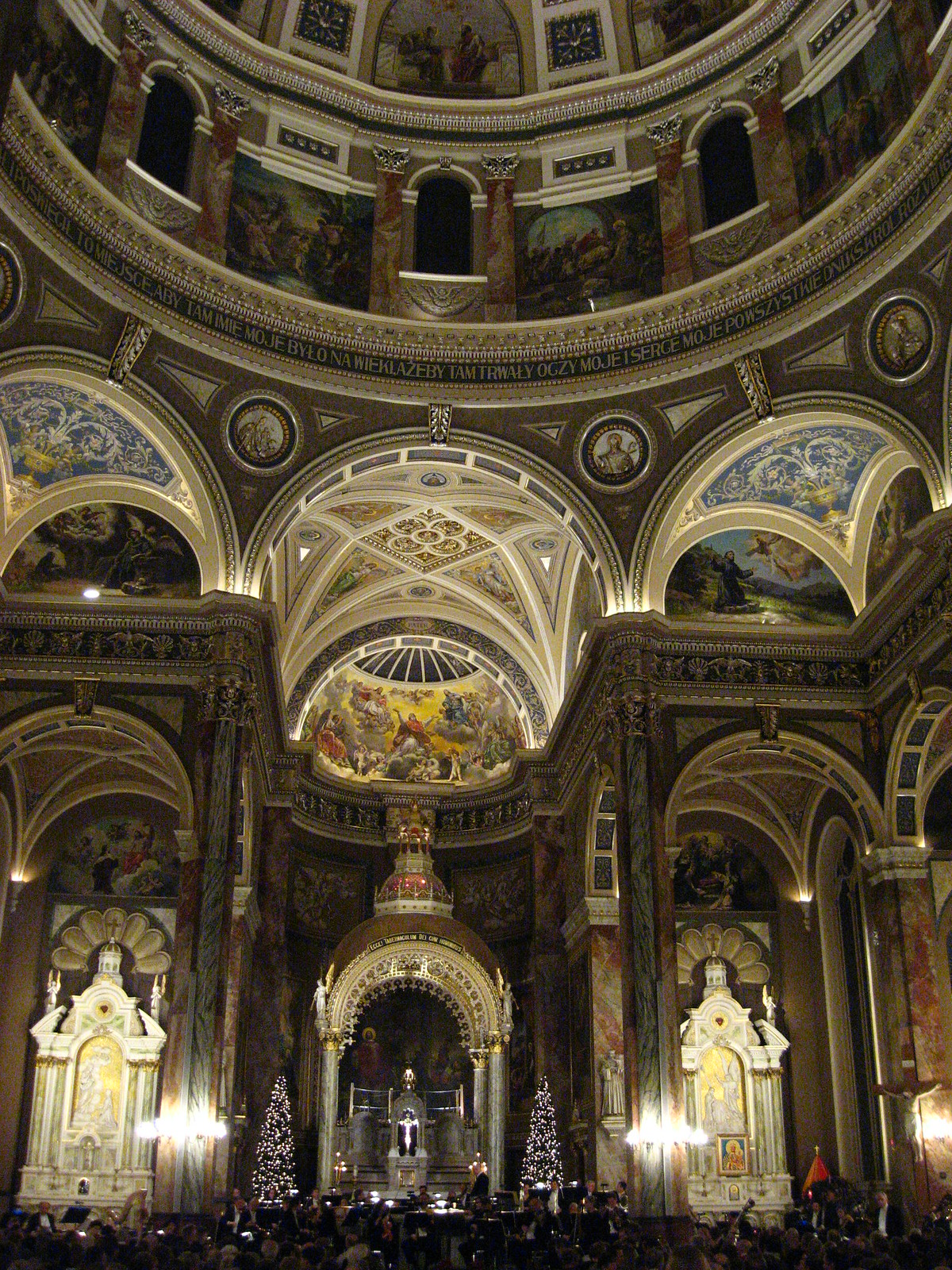 A great and mighty wonder,
A full and holy cure:
The virgin bears the infant
With virgin honor pure!

The Word becomes incarnate
And yet remains on high,
And cherubim sing anthems
To shepherds from the sky.

Proclaim the Savior’s birth:
“To God on high be glory
And peace to all the earth!”